Ten years ago, this clock was hanging on the wall of a Family Video. That night, I was working, like any other night at that time of my life. I was set to close the store. Part of those duties included cleaning the store. I had just begun to clean up some of the more hidden parts of the store and hopped on top of one of the cabinets to retrieve some items that had fallen behind it.

As I hopped off the counter, I heard a loud noise. I turned and the cabinet holding the entirety of our video game selection was tipping towards me. I was unable to get out of the way and it knocked me over and landed on me. The way I landed, and how it landed on top of me kept me from getting up. There was smoke and dust in the air. I heard a woman shout, “Call 911!”

“Hang up the damn phone. Nobody call 911. I’m fine.” I was more embarrassed than anything. I knew I’d put on some weight, but I never imagined it was enough to topple massive cabinets.  Then I heard a little old lady shout, “Oh my goodness! There’s a truck in the store!” Out of nowhere, a man appeared and lifted this cabinet off me. I was able to get out from under it as I heard sirens approaching. As suddenly as he appeared, he was gone. I never saw him again.  He was either an angel or wanted.

Once I was able to get out, I could see the wall and the ceiling were caved in. The clock was missing. People were milling about, trying to get a closer look when I heard a distinctive chime of the door opening. A woman came in, with a bag full of DVD’s, and casually dropped them off in the drop box and proceeded to browse. I told her, “Hey, you gotta go, we cant have people inside.” Then that little old lady shouted, “That’s the lady who hit the store!” She was either in shock or hoping no one noticed her goddamn Ford Explorer was 3 feet off the ground inside my store! Her toddler of a child even weirdly told us, “I told my Mommy her brakes sounded funny.” Bullshit. Now we knew why it took her so long to come in. She was likely coaching her kid.

The cause of the crash was determined to be “Brake failure.” But she drove against the curb, thought she had more room, revved it and ramped it, and voila she came through the wall. I ended up going to the hospital with a possible broken leg. Turns out, I was just a gigantic baby.

My boss at the time presented me with this clock, which stopped at the moment of impact. We had to close the store that night, but we were open the next day. I wound up with a few days off and an ok settlement. It wasn’t much longer that I left to start a career in law enforcement. I keep this clock handy as a reminder of how quickly things can change.

“What’s That? Wednesday” is a series of posts about quirky things I have in my office that people tend to ask about when they spot them. 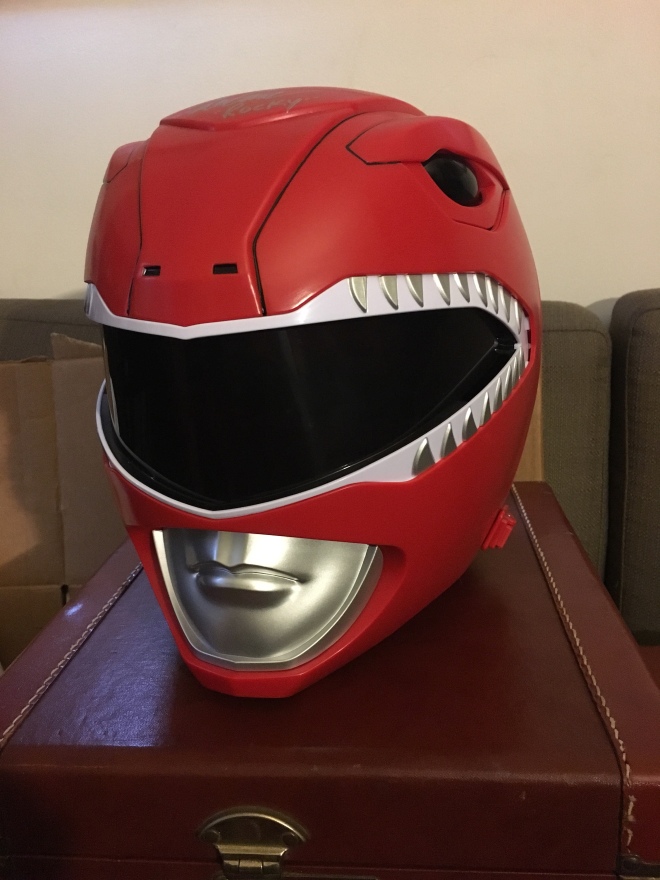 Take a minute and think back to your childhood. Think about the shows you watched as a kid. If you had to pick one show, more than any other show, that defines your childhood what would it be?

For me, Mighty Morphin Power Rangers was that show. Man, I couldn’t get enough of it. The heroes fighting the villains. The badass uniforms. The fact that 5 kids were selected and the idea that average people sometimes are called to incredible things. The magic of it all resonated with me. I collected the toys, the magazines, the McDonald’s giveaways. I had watches, trading cards, you name it. I had a brother who worked at K-Mart who would keep an eye on the stock before it hit shelves and would buy me the toys. Man, it was a wonderful part of my childhood. Eventually I grew out of it. I hadn’t thought much about it until the dark gritty remake trailer hit the internet. It sucked me back in. A few years later I heard a new movie was coming out. Then I saw the Red Ranger Legacy Helmet. I knew I had to have it. I couldn’t afford the $400 remakes so I watched Amazon like a hawk. I scored mine for like $60 AND had amazon rewards points to cover it. Basically free! The day it came in I was a kid all over again. I came home on duty when my girlfriend told me it arrived. Opening it was exhilarating. But wait…it gets better.

I knew Austin St. John had left show business to be a paramedic. I always thought that was cool. Then he was a medic overseas! But he had finally come back to the nerd circuit. He was coming to my hometown for a comic-con. I proudly took my helmet, like a thousand other people, and waited to meet him. We had a stroller and two little boys. He called us to the front of the line because he knew the struggles of keeping kids waiting. And then he took my son, treated him like he was one of his own kids, let him help hold the marker while he signed the helmet, and chatted with him for a few minutes. My kid was awe struck. “Jason” was as cool in real life as he was on the show. I was double awe-struck. The level of kindness Austin St John showed a couple of strangers almost choked me up.

Fast forward to a Days of the Dead convention a few months later. Steve Cardenas was coming. I have no idea why he comes to zombie/horror conventions but let’s not get hung up on details. I’d been in training all day and was still in BDU’s. I snagged the helmet, on a rainy day, and did everything in my power to keep it dry. I rolled up in a marked car, got out with a helmet to MANY stares, and had to get in past the gawking smokers crowding the door. I bee lined for Cardenas table expecting a long line. I guess I was early and got to walk right up. I’m a 32 year old man looking at one of his childhood heroes. I didn’t have any kids with me. God, I must’ve looked like a weirdo. So, I made sure to tell him, “I’m totally not a weirdo.” Which is exactly what a weirdo WOULD say. He eased my worries by telling me how he was the same way recently meeting Ralph Maccio. Anywho, he signed my helmet, let me take a picture with him, and I was on my way.

I’m torn now between keeping the helmet with just the Jason and Rocky sigs or getting more rangers signed on the red helmet. Such a nerd dilemma. If you ever get a chance to meet Steve Cardenas or Austin St John, do it. They’re were both great to meet and didn’t disappoint at all.

*”Whats That? Wednesday” will be a weekly blog post where I write about things I display in my office that people often point at and ask, you guessed it, “What’s that?”